A consent workshop activity using handshakes as a way of learning about sexual consent. Taken from my new Consent Teaching Pack

This is an activity that Meg-John Barker and I have been working on together over the last couple of years. I’ve used it in sex education with young people and adults, Meg-John has used it in training courses with therapists and we’ve both used it at seminars. We’ve found it a really useful exercise as it opens up lots of discussion about how we ask for our needs to be met as well as understanding some of the barriers for this. It works as an analogy for sexual consent, but it’s also interesting to think about how we do and don’t consent to greetings in everyday life.

For full instructions on how to use this activity, as well as a comprehensive slideshow to help you to deliver it, you should check out my new Consent Teaching Pack, which contains several other interactive and in-depth activities about consent, negotiation and power. It’s just £12.50 for an instant download. 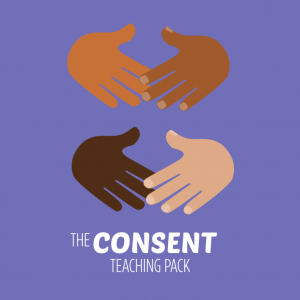 If you would like to deliver this activity in the classroom as part of a relationships and sex education curriculum for 14 – 16 year olds, head to DO… RSE for Schools.

We also really enjoy using this as we learn from it every time we facilitate it – we hope you like it too. We’ve also massively improved our greetings whenever we meet up (a good firm hug, lasting for about 2 seconds).

If you would like me to come to your school or college or youth club to teach this you can book me here. You might also be interested in my new training course about it here.

To explore what consent may feel like and exploring what makes getting and giving consent easier and harder.

It takes teaching about consent beyond a very simple legalistic message such as ‘no means no’ and gives people the opportunity to experience the barriers and opportunities for experiencing consent in a safer environment.

This is a simple sounding activity but it is potentially quite a powerful one and a tricky one to get right. It can open up a lot of discussion so it may need a bit of guidance to take it to where you need it to go. I’ve provided wording which I’ve found works for me. If you direct the discussion quite firmly you can do this in 30 minutes. If you allow the discussion to roam a little it can take longer (which might be good to do in a training course).

Experience and practice negotiation and agreement

This involves asking everyone to shake hands and there will a total of three rounds of handshakes! Although people may feel like they should take part in the handshakes (which might be one of the learning points of the activity) please don’t explicitly force people to do so.

Explain to the group “This is a lesson about consent and what that means. First of all I’d like everyone to shake hands, if you want to.”

Ask the group the following questions and try to make sure different views are heard. At this point the participants will still be a bit wary of what’s going on, so you might want to keep this part of the discussion a bit shorter.

“how was it to other handshakes you’ve had?”

“what’s the secret to a great handshake?” (people might talk about firmness, or the context – eg who’s doing the handshake and when)

Then explain that you would like them to shake hands again …

“Do you want to shake hands with left or right hand?” [you might want to ask if there are any left handed people in the room and which hand they shake with]

“Do you want to go up and down or side to side?”

“Do you want to dry your hands first?”

“Do you want to do something else altogether? A fist bump? A shoulder bump? A hug? A kiss on the cheek (no tongues)?”

Then allow everyone who wants to to shake hands again, notice what happens in the room (there’s often more laughter and smiling, it also takes longer). Then ask the following questions …

“how was that?” (answers here may a bit longer than the first time round, generally speaking lots of people prefer it)

“how was it to other handshakes you’ve had?”

“how did it compare to the first handshake?” (people often say “it was more mutual,” “we knew what was going to happen,” “it was more fun” “there was more eye contact”)

“did anyone prefer the first handshake?” (try to convince people that this isn’t a trick question – it’s important that people feel they can say they did. They might say “it was less awkward,” “it was over more quickly,” “it was more fun,” “it was more exciting not knowing how it was going to be.”)

“So neither ‘first handshake’ or ‘second handshake’ is ideal. Instead we could try being more ‘third handshake.’

To explore how people can incorporate the best of both handshakes and to think of how they do this. So explain

“I’d like you to shake hands for one last time, but this time I’d like you to try and get a balance between first handshake and second handshake. Try to keep it fun and spontaneous but also try to find ways of communicating with the other person to make sure that you and they are both into it (and can stop if you want). Really pay attention to them. Look for body language, eye contact, facial expressions that kind of thing”

“How was that handshake?”

“How did it compare with the first two?”

“Think about how you communicated to each other about the handshake. What did you do or say? Play it back in your head in super slow motion. What happened?”

Often the ‘third handshake’ was the preferred handshake of the group. Ask the group to think of why this is. Usually they say that they really felt a connection this time.

I sometimes then ask people to do another ‘third handshake’ but this time with someone they haven’t shook hands with yet. This is to test whether we can have a really good mutually enjoyable handshake with someone that we have never shaken hands with before.

“So this is all about consent. You might know that consent means agreeing to do something. Sex without consent is rape or sexual assault. Also someone has to be able to give their capacity to consent. This means that if someone is drunk or nearly unconscious or felt they weren’t able to say ‘no’ then it’s not consensual. Also, just because someone hasn’t said ‘no’ doesn’t mean ‘yes.’ So if someone says ‘no’ you should stop.”

“However what does consent feel like and how do we have sex we actually might want to have? You’ve all been able to practice how good consent feels.”

“So when people have the first kind of handshake they are shaking hands in the way that they are expected to, or they just take part in someone else’s handshake. Often when people have sex they take a ‘first handshake’ approach. They often don’t (or can’t) negotiate or say what they want but rely on the script for what counts as sex. Sex in this case might mean ‘one thing leads to another.’ ‘Foreplay’ and then ‘intercourse’ (like penis or toys in vagina or anus).”

“This approach works for some people and some people like that kind of sex because it can be spontaneous and exciting. However sometimes it can lead to rubbish sex because people aren’t able to talk about what they actually like or they don’t have bodies that can enjoy that kind of sex. Sometimes it can result in sex that isn’t consenting: either like feeling forced to take part in someone else’s handshake, or doing it because it’s expected, or one thing leading to another without anyone checking in that this is what you wanted.”

That’s quite a lot so make sure people have understood that. Then explain …

“However if people were more ‘second handshake’ about sex then it would be really difficult to have sex because everything would have to be negotiated. There might be so much negotiation about every single thing (kissing, touching, words, taking clothes off etc) that it would take away a lot of the fun and spontaneity. Sometimes being a bit ‘second handshake’ is important and some people are able to talk about sex like this. There are ways to be second handshake when we’re planning sex with someone – such as texting what we like, or talking together about different kinds of sex we might want to try. However a lot of people find this really difficult.”

“So, the key is to be more ‘third handshake.’ This means really paying attention to what each other wants and trying to make it mutually pleasurable. So focus on the tiny micro-communications of the other person: eye contact, nodding or shaking heads, facial expressions, noises, short words or phrases like “oh yeah” or “bit softer,” how bodies move towards or against each other, moving hands etc.”

Are there times when you feel like you can’t say no to a handshake? Did that happen in this lesson? Why?

How might how we feel about ourselves affect how much we feel we can have the sex (or handshakes) that we actually want to have?

Think about the words used to describe different people who have sex – what difference would that make? For instance, what are sexually active men called compared with what sexually active women are called?

What makes asking for the sex you want (or don’t want) more difficult? What makes it easier?

Are there times when it’s better to talk more than others?

I've written "Can We Talk About Consent - A Book About freedom, choices, and agreement." It's about how to choose your perfect pizza, what to watch on TV, who plays in goal, politics, rights, and yeah also a bit about sex. The illustrations are beautiful and hilarious.

Out in January but please.....